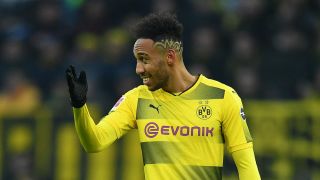 The Bundesliga club confirmed on Saturday they had received a bid for the Gabon international, who is reportedly valued in the region of €65million.

Wenger remains uncertain about whether a deal can be struck for the 28-year-old and suggested the Gunners could look elsewhere if they cannot reach an agreement.

"Confident or not confident? I don't know. We are not close to a deal with Aubameyang or anyone else," he told a news conference.

"It's one possible movement but we have other things in mind as well. The final decision is not made."

Wenger also stressed he does not want Danny Welbeck to leave the club, with reports suggesting Besiktas are interested in the striker as they seek a replacement for Cenk Tosun, who is now at Everton.

Welbeck and Olivier Giroud are not fit enough to feature in Wednesday's EFL Cup semi-final second leg with Chelsea, but Aaron Ramsey and Nacho Monreal could both be involved.

Wenger expects a more open encounter than the 0-0 first-leg draw at Stamford Bridge but does not believe either side is the favourite.

"We might have Ramsey back in the squad, he has a test. We had the uncertainty about Nacho Monreal and he has a test as well," he said.

"It's an important game. We want to go to the final. The two teams know each other very well. At some stage, the teams will have to open up so it should be much more spectacular than the first one.

"You're always cautious to say that. The two teams are very close to each other and the form on the day can decide it.

"It has always been very tight and it's very unpredictable. Honestly, I don't see any favourite in the tie."