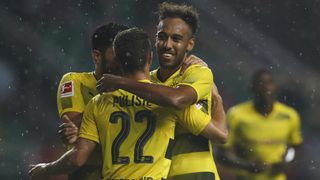 Pierre-Emerick Aubameyang will be fuelled by the idea of revenge when Borussia Dortmund face Tottenham on Wednesday after failed transfer talks with Spurs in 2012.

The Gabon striker has previously revealed that the Premier League side approached him five years ago when he was playing for Saint-Etienne before a move failed to materialise, criticising them for things getting "weird".

Now, Aubameyang has claimed that talks were so advanced that he visited White Hart Lane and Spurs' training ground.

A year after the deal broke down the striker moved to Borussia Dortmund and has been a huge success - including 40 goals across all competitions last season - but he was happy to admit that the idea of getting one over Spurs was an appealing one.

"Of course, this is once again an extra motivation," he told Bild ahead of Wednesday's Champions League clash.

"In 2016 we progressed past Spurs in the Europa League and I scored three goals in the tie. Of course I want to meet them again.

"[Back in 2012] I was in Tottenham at the time, looked at the stadium and the training ground and we talked. But after that, no one stepped forward to see me."