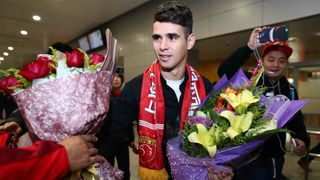 Brazil international Renato Augusto revealed how he urged countrymen Oscar and Hulk to head to China.

He joins former Porto and Zenit striker Hulk, who signed last year, at the club.

"Oscar and Hulk came to China too and both of them have phoned me before they made the move," Augusto said on Thursday.

"I told them, 'come here, Chinese league is fantastic'. I also said to Oscar Shanghai is one of the best cities in China."

Carlos Tevez, Jackson Martinez, Ramires and John Obi Mikel are among others playing in China.

Augusto believes the CSL is on track to grow into one of the world's best competitions, and soon.

"I never regret coming to China, where there are fast-growing football leagues, brilliant pitches, passionate fans, wonderful organisers and managers of football clubs," he said.

"The CSL is growing at a breakneck speed, and I am convinced that it will become one of the most prestigious leagues in the world within a short time."