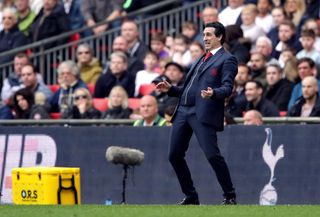 Arsenal beat Newcastle on Monday evening to move above Tottenham and Manchester United into third place in the Premier League – but head coach Unai Emery believes improving their away form is key to staying there.

Aaron Ramsey and Alexandre Lacazette struck in either half to wrap up a 2-0 victory for the Gunners and give them the upper-hand in the battle for a top-four finish.

Only reigning champions Manchester City have taken more points at home than Emery’s side this season – but a poor return on the road threatens to derail the Spaniard’s bid to secure a return to the Champions League.

Arsenal have won only five times away from the Emirates Stadium in the league this season, with only two of their remaining seven league games at home.

A trip to Everton is first up on Sunday and Emery concedes there is still a huge challenge to secure a place in the top four.

“Our target is very clear,” he said.

“It’s going to be very difficult but step-by-step we’ve started to rise up the table after the first two matches in the Premier League when we lost against Manchester City and Chelsea.

“We need to convince people that we can be consistent away.

Arsenal’s climb up the table has been rapid, as they were 10 points behind neighbours Spurs a matter of weeks ago.

Victory over Ole Gunnar Solskjaer’s Manchester United also helped build a small gap back to the other top-four contenders.

The three points were never really in doubt against the lowly Magpies and Ramsey stroked them ahead with a nice finish on the half-hour, having seen an earlier effort chalked off for a foul in the build-up.

The game was not won until the 83rd minute when Lacazette finished Pierre-Emerick Aubameyang’s flick-on with a brilliant lob.

The result leaves Newcastle seven points clear of the bottom three and manager Rafael Benitez was pleased with what he saw from his side.

“I am disappointed because we knew it would be difficult, we knew we could lose,” he said.

“… If you don’t take your chances and you are not precise against these teams then you’ll struggle.

“I am proud of the players because they are trying hard. Today there was a big difference between the teams, but we were close enough to be a threat.

“When it was 1-0, we were pushing and you could feel the nerves in the stadium.”