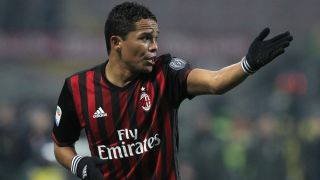 Carlos Bacca believes he was part of the worst AC Milan team in history but insists his time at the club was a personal success.

The Colombia international signed from Sevilla in July 2015 for a reported fee of €30million and scored 34 goals in all competitions, helping them to a Supercoppa Italiana triumph last year and a place in this season's Europa League.

The 31-year-old returned to LaLiga with Villarreal in the transfer window as Milan conducted an overhaul of the squad following the takeover by Rossoneri Sport Investment Lux.

Bacca has pulled no punches in his assessment of the quality of Milan's squad during his two-year spell at San Siro but says helping them return to European competition shows his time in Serie A was successful.

"The past few years at Milan were satisfactory for me personally. I achieved my objective," he told W Radio in Colombia.

"Things could have gone better but you need help from the directors.

"I was at the worst Milan in history. After 30 years, president Silvio Berlusconi wanted to sell the club. We had different ideas with the coach and the new owners, but I left with my head held high because Milan are in Europe and I gave my contribution.

"I'm pleased Milan returned to Europe. That was my goal when I left Sevilla."

Villarreal, who are second in Group A, take on Slavia Prague.