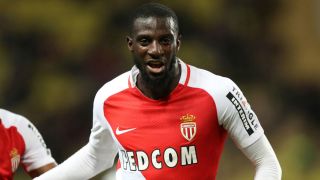 Tiemoue Bakayoko's brother has indicated the Monaco midfielder would love the chance to sign for Ligue 1 title rivals Paris Saint-Germain.

Frenchman Bakayoko, who this month received his first international call-up in place of injured Paul Pogba, has starred for Monaco in their run to the quarter-finals of the Champions League, scoring the decisive goal against Manchester City in the last round.

While the 22-year-old has suggested he would not seek a move from Monaco imminently, he has been linked to Premier League leaders Chelsea and Bakayoko's older brother Soualio suggested a switch to PSG would interest his sibling.

"When he was young, he wanted to go to PSG," Soualio Bakayoko, who plays in the Championnat National for Paris FC, told radio station RMC Sport.

"He has always dreamed of PSG. When I said to him, 'Imagine, one day, you sign for PSG,' he told me: 'I would really like that. If they offer me that, I do not see why I would refuse.'

Monaco – who face Borussia Dortmund in the last eight of the Champions League – lead PSG by three points with eight matches remaining and the clubs meet in the Coupe de la Ligue final on Saturday.