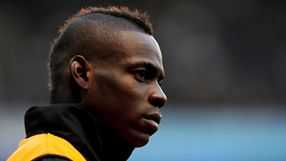 The Italy striker, a boyhood Milan fan, first broke through at rivals Inter Milan and is returning home for a fee media reports have put at 20 million euros after a largely frustrating spell with the English champions.

City manager Roberto Mancini, who gave the player his debut at Inter, had said Balotelli would not be leaving in the January transfer window but the striker's desire to go back to Italy appears to have won the day.

Balotelli, who provided the crucial injury-time pass that set up Sergio Aguero for the dramatic Premier League title-winning goal last May, was not included in City's squad that drew 0-0 at Queens Park Rangers on Tuesday and Mancini said he hoped a deal could be concluded on Wednesday.

"Both clubs are talking about Mario Balotelli. Maybe tomorrow they can close. I think Mario needs to do a medical. We are very sorry," Mancini told Sky Sports News.

"We love Mario, Mario likes the players but I think he had this big chance to come back in Italy and to play for another top club like Milan.

"I hope Mario can continue to improve and can show all is well because I think if he works hard he can continue his growing and can become one of the best players in Europe."

Tales of the 22-year-old blowing up his bathroom with fireworks or walking into a school asking for the toilet have amused British fans but City supporters have felt shortchanged after he netted just 20 league goals since his 22 million euro move from Inter.

Mancini has been left exasperated by his fellow Italian on numerous occasions. Earlier this month British newspapers published photographs that appeared to show the pair grappling following a training ground bust-up.

Going back to Italy will be no walk in the park though for Balotelli, with Milan owner Silvio Berlusconi recently saying his fifth-placed Serie A side did not need a "rotten apple" like the combustible forward.

Controversy also followed Balotelli while at Inter where team-mates once assaulted him for wearing Milan colours. He also got into trouble for turning up at a northern Italian prison and asking to look around.

Italian leaders and champions Juventus - whose fans racially abused Balotelli when he was last in Serie A - were also interested in signing him after he shone for the national side at Euro 2012, sources close to the talks told Reuters.

Milan, in need of a striker after selling Alexandre Pato to Corinthians, moved for Balotelli after missing out on new Galatasaray forward Didier Drogba.

The Rossoneri - last Italian champions in 2011 - had a poor start to the season but have climbed up the table in recent weeks thanks to the goals of young forward Stephan El Shaarawy who is now likely to partner Balotelli for club and country.

A Champions League last-16 tie with Barcelona over the next two months also awaits for the seven-times European Cup winners.

Balotelli's exit could herald a late push from second-placed City for a replacement striker in the final days of the transfer window with Edin Dzeko, Carlos Tevez and Sergio Aguero the Premier League side's only established front-men.