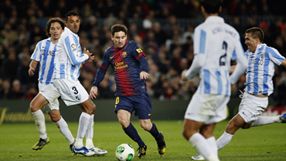 The La Liga leaders progressed 6-4 on aggregate, with goals from Pedro, Gerard Pique and late strikes from Andres Iniesta and Lionel Messi putting them through after Malaga had twice drawn level.

"The two teams have played a great game and now we have the reward of a semi-final against Real Madrid," Pique, who became a father for the first time on Tuesday, told Spanish television.

"We had to work hard to get control of the ball, but in the end the result was fair, despite them having also played very well."

The 2011 Cup winners Real host the first leg of the semi-final at the Bernabeu next week after Jose Mourinho's side beat Valencia 3-1 on aggregate, despite having two players sent off in Wednesday's 1-1 second-leg draw at the Mestalla.

"On Sunday, we have an important league game against Osasuna, I don't want to talk about it," Barca's assistant coach Jordi Roura said when asked about the upcoming 'clasico'.

On the other side of the draw, Atletico Madrid set up a last four encounter with Sevilla after drawing 1-1 at their city rivals Real Betis to progress 3-1 on aggregate.

Diego Costa scored a valuable away goal, to add to last week's 2-0 victory at the Calderon, after a dreadful misunderstanding in the Betis defence just before half-time.

Chasing a long punt over the top, Betis defender Antonio Amaya did not see his keeper Casto Espinosa had raced out of the area and he headed the ball past him allowing Costa to run through and tap into an empty net.

La Liga's second-placed side Atletico successfully stifled their hosts until they gave away a penalty in the final minute to concede their first goal in six games in this season's cup competition.

Atletico defender Diego Godin bundled over Jorge Molina in the area and the striker netted from the spot.

Sevilla, who beat Atletico 2-0 in the 2010 Cup final, swept aside Real Zaragoza 4-0 on aggregate in their quarter final.

Barca took an early lead in Malaga when Dani Alves broke into the area and crossed for Pedro to head the opener in the ninth minute, but it only took Malaga three minutes to level.

The teams struggled to keep their feet on the Rosaleda's poor pitch but the chances fell for both sides as Malaga refused to let Barca settle.

Messi was denied in a one-on-one and Iniesta hit the crossbar but Pinto also had to be alert as the hosts showed some of the bite that has helped them reach the last 16 of the Champions League in their debut campaign.

Pique put Barca back in front, chesting down Iniesta's cross and slotting into the corner just after the restart.

Barca were now in control but against the run of play, Roque Santa Cruz fired Malaga level again with a low shot off the far post in the 68th minute.