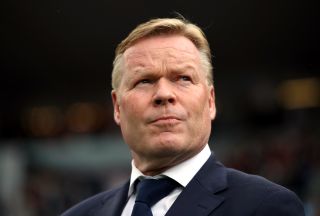 The Holland coach, who played for Barca between 1989 and 1995, has expressed his interest in replacing Quique Setien after being strongly linked with the role.

In an interview streamed on the club’s website on Tuesday evening, Bartomeu said: “If nothing goes wrong, Koeman will be Barca’s coach next season.

🔊 @jmbartomeu: "If nothing goes wrong, Koeman will be Barça's head coach next season. We already know how he thinks and his philosophy" pic.twitter.com/5CZHKBi597— FC Barcelona (@FCBarcelona) August 18, 2020

“We already know how he thinks and his philosophy.”

Setien was shown the door on Monday in the wake of Friday’s stunning 8-2 defeat to Bayern Munich in the Champions League which has also cost sporting director Eric Abidal his job.

And Bartomeu also indicated that Koeman, who is contracted with the Dutch national team until the 2022 World Cup, had been their first choice ahead of Setien when the latter was appointed in January of this year.

“We bet on him,” Bartomeu continued. “He has been in (Johan) Cruyff’s ‘Dream Team’. He was the first one we called in January. It’s a dream for him.”

The fallout from Friday’s shock defeat has also included speculation that star man Lionel Messi could end his long association with the club, but Bartomeu moved to quash that by saying the 33-year-old would be key to Koeman’s side next season.

“I have spoken with Koeman and the pillar of our project is Messi,” he said. “He has a contract until 2021, I speak a lot with Leo and more regularly with his father.

“He is number one in the world. There is no doubt that in Koeman’s new project you can count on Messi.”