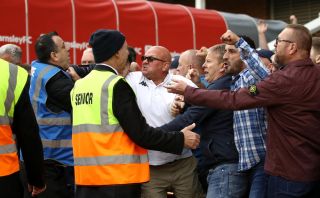 Barnsley and Leeds have announced they are “working together” to assess the crowd trouble which marred Sunday’s derby clash at Oakwell.

South Yorkshire Police has also launched an investigation following the arrest of three people on suspicion of public order offences and one for assault, the PA news agency understands.

A club spokesperson said: “Barnsley Football Club and Leeds United Football Club are greatly disappointed by reports of violence at yesterday’s game and will be working together to assess the matter.”

Leeds fans clashed with stewards in the away end towards the latter stages of their side’s 2-0 win and in a separate incident fighting also broke out in the east stand.

Trouble flared shortly after Leeds substitute Eddie Nketiah had fired the visitors into an 84th-minute lead, while Mateusz Klich converted a penalty five minutes later to seal all three points for Marcelo Bielsa’s side.

Victory moved Leeds back to the top of the Sky Bet Championship, ahead of Swansea on goal difference.

Barnsley, promoted from League One last season, slipped into the bottom three after four defeats and two draws since their opening-day win against Fulham.