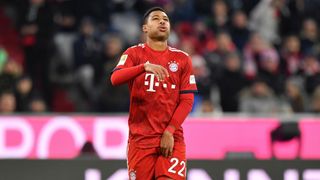 Gnabry was replaced by Franck Ribery during the first half of Wednesday's 1-0 success, earned thanks to the substitute's late strike.

But the Bundesliga champions did not offer any potential timescale for the 23-year-old's return to action in a medical update.

"The champions will also have to manage without Renato Sanches," Bayern added in a statement.

"The Portugal international was shown a second yellow card in the hectic closing stages and now serves a one-match ban.

"In addition to the duo, Bayern are also without the services of Arjen Robben (thigh), James Rodriguez (knee) and World Cup winner Corentin Tolisso (cruciate)."