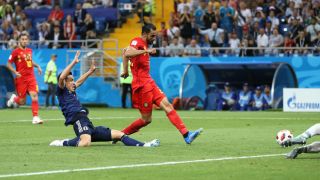 After a goalless first half, Japan struck twice in seven minutes following the interval to take full control of a gripping last-16 tie in Rostov-on-Don on Monday.

But, instead, Belgium became the first team to come from two goals down to win in a World Cup knockout game since 1970 and will now face five-time winners Brazil on Friday.

Keisuke Honda almost beat Thibaut Courtois with a free-kick in injury time but a clinical Belgium counter-attack, which ended in Thomas Meunier setting up Chadli for a simple finish, broke Japanese hearts.