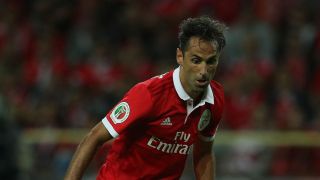 Jonas converted a 90th-minute penalty as Benfica salvaged a 1-1 draw in an action-packed Lisbon derby against Sporting CP.

Benfica looked set to slip six points off the pace in the Primeira Liga but Brazilian striker Jonas cancelled out Gelson Martins' opener with his 19th top-flight goal of the season at the death, the result enabling Porto to open up a two-point lead at the summit thanks to a 2-1 victory over Feirense earlier on Wednesday.

Sporting took the lead when Fabio Coentrao's shot took a deflection off Ruben Dias and was headed beyond Bruno Varela by Martins in the 19th minute.

Benfica felt they should have had a penalty when Coentrao appeared to block Jonas' volley with his arm but, after Filip Krovinovic latched onto the loose ball and rattled the crossbar, a video review maintained referee Hugo Miguel's on-field decision not to award the spot-kick.

Rui Vitoria's men were again denied a chance to level from 12 yards by the video assistant referee in the second half when a fierce effort from Jonas was diverted wide by the arm of Cristiano Piccini.

Joao Carvalho bent narrowly over as Benfica pushed for an equaliser, which they finally got when Jonas lashed home after Rodrigo Battaglia was deemed to have blocked a shot from Rafa with his hand, though they may feel they deserved more.