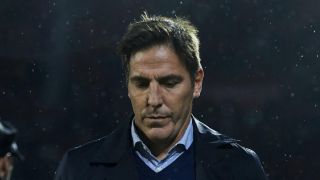 Eduardo Berizzo has been appointed the new coach of Athletic Bilbao, signing a one-year deal to take charge of the Basque club.

Ziganda's departure was announced earlier in the month, the coach lasting a single season after succeeding Ernesto Valverde at San Mames.

The appointment of Berizzo, who required prostate surgery last season, sees the 48-year-old return to management after he was sacked by Sevilla last December.

"For me it's an honour to be here, to defend those common values ​​that we have," Berizzo told a news conference on Thursday. "I appreciate all the confidence you've given me here, I hope to make Athletic better and have a defined style.

"I want to belong and be part of the Athletic philosophy, there is also a technical part and a sentimental part for the amount of people who have advised me to come here."

Berizzo previously worked with Marcelo Bielsa during his spell as Chile coach, with the Argentine also a former Athletic coach, having led the club from 2011 to 2013.

"I spoke with Marcelo to be here today and he told me not to hesitate a minute to come and I also talked with [former Athetic coach Luis Maria] Bonini, who is no longer with us," Berizzo added.

"Marcelo has told me about the players, it's been a while, but I know Athletic well and we have to make a powerful team, I've seen all their matches and I have not asked for any signings."