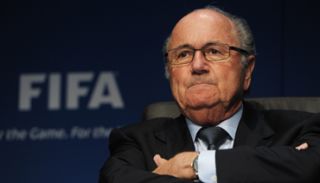 Blatter also said he would talk to the Italian football federation (FIGC), which he said had not been thorough enough in investigating Sunday's incident in the match at AC Milan and had made its decision too quickly.

"What is surprising and is not understandable for me, is that the disciplinary committee of the FIGC has taken a decision, not even 24 hours after the event, by just imposing a fine," he told FIFA.com.

"They have not made any investigation of what happened. And just to give a pecuniary sanction is not valid, that is not acceptable.

"You will always find money. What is 50,000 euros for such an incident? I'm not happy and I will call the Italian Federation. That's not a way to deal with such matters."

However, FIGC president Giancarlo Abete said the disciplinary tribunal was abiding by current rules, although his federation would willingly adopt new ones and were waiting for either FIFA or the European governing body UEFA to take a lead.

"I think lessons have not been learned. It is incredible, that we had such incidents especially in the Italian Serie A in the San Siro between AC Milan and Roma, a very important match," Blatter added.

"The referee had to stop the match for a few minutes in order to bring back calm. This is bad."

The referee stopped the match early in the second half of Sunday evening's match after racist chanting by the visiting fans. Warnings were broadcast over the public address system and play was re-started after a two-minute delay.

The Italian disciplinary committee announced the sanction on Monday, saying three AC Milan players, who it did not identify, had been subject to racist abuse.

Milan's team also included Kevin-Prince Boateng, who walked off during a friendly match in January after racist abuse from the crowd at a fourth tier club. The Milan team followed him.

FIFA's annual Congress in Mauritius at the end of the month will vote on several proposals aimed at curbing racism at matches.

These would include observers at matches to report and provide evidence of racism behaviour in the stands, plus a two tier system of sanctions including points deductions and expulsion from competition for severe offences.

"In this resolution, there are foreseen sanctions. And these sanctions must be applied all around the world," said Blatter.

"That's why we need the Congress's decision. That will bind together all the 209 [national] associations.

"I'm looking forward to that and I do hope, that there we will be no other incidents until May 30, when we will deal with this matter in Mauritius."

Abete told RAI television he would reply to any correspondence from Blatter.

"We are on the front-line of the fight against racism. The rules are changing, but for the moment, these are what we have and we respect the independence of the sporting tribunals," he said.

"We've already realised that a fine is not a sufficient deterrent. In future, [the sanction] could go from a partial closure of the stadium to a total closure, depending on the seriousness of the incidents.

"Any new rules would be included in the sporting code for the 2013/14 season.

"It doesn't make sense to talk about not taking enough time; the facts were clear and the referee's report was explicit.

"The FIGC is waiting to be contacted by FIFA but for the moment, there has been no official communication."