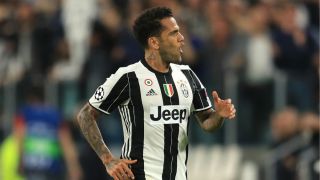 Leonardo Bonucci hailed Dani Alves' ability to adapt to Juventus' style of play after eight years at Barcelona and labelled the Brazilian "an alien" following his fine performances in recent weeks.

The 34-year-old initially struggled to find his feet in Turin, but he has developed into an important first-team member since recovering from a fractured fibula.

Alves played a key role in Juventus' Champions League semi-final win over Monaco, creating three goals and scoring the other one in a 4-1 aggregate trimuph, and Bonucci is in awe of his experienced team-mate.

"Only a great player and a serious professional can change his style of play to adapt to our philosophy like he has done.

"He has brought experience and enthusiasm to Juventus.

"It took him some time to understand Italian football and Juventus' style, but he has reached a surreal level now."

The right-back has made 29 appearances in all competitions for Juve, scoring five goals in the process.