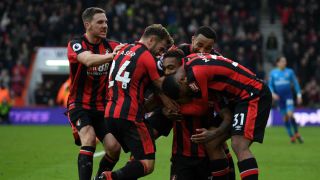 Arsenal experienced an uncomfortable taste of life without Alexis Sanchez on Sunday, as they gave up the lead to lose 2-1 away to struggling Bournemouth.

The visitors were missing two key players on the south coast, where a knee injury kept Mesut Ozil out of the team and Sanchez was omitted as he continues to be linked with a move to Manchester City or Manchester United.

The absence of the Gunners' chief creator and most potent attacking threat told as they struggled to break down the home team prior to Hector Bellerin's 52nd-minute opener.

Callum Wilson's equaliser with 20 minutes to go was quickly followed by Jordon Ibe's first Premier League goal for Bournemouth and those strikes proved enough to register a famous victory for Eddie Howe's team, who are now unbeaten in their last five matches across all competitions.

Arsenal meanwhile remain sixth, but have not won in five and are struggling to keep pace with the Champions League qualification challengers ahead of them in the table.

If, as expected, Sanchez completes an imminent move to the Etihad Stadium or Old Trafford, Arsene Wenger must find new attacking solutions ahead of a London derby at home to a resurgent Crystal Palace next weekend.

Bournemouth enjoyed an early sight of goal when Adam Smith fired wide from outside the area, but it was Arsenal who had the better of the opening exchanges.

Ainsley Maitland-Niles hit the bar after collecting a cross from Alexandre Lacazette at the back post and a deflected Alex Iwobi strike forced Asmir Begovic to parry behind and concede a corner.

The Gunners then had to wait until the 35th minute to threaten again, Begovic using his feet to deny Danny Welbeck one-on-one.

Howe's side finished the half strongly, though, Ryan Fraser drawing an important block from Calum Chambers and then testing Petr Cech, while Arsenal were perhaps fortunate not to concede a penalty for handball against Iwobi from a corner.

The away team capitalised on that good fortune by taking the lead early in the second half, when Iwobi's well-weighted throughball released Bellerin in behind the Bournemouth defence down the right.

The Spaniard raced into the area and was able to squeeze a low finish under Begovic, who got a touch but could only succeed in making the ball loop up and bounce over the line.

Undeterred, Bournemouth levelled in the 70th minute, a brilliant Fraser pass to the edge of the penalty area allowing Wilson to steer a sharp, first-time finish past Cech, who had charged off his line.

Four minutes later it was 2-1, Ibe running onto Wilson's lay-off and firing home a fierce strike to open his league account for the club.

Wenger introduced Theo Walcott, another player who has been linked with a move away from north London, in an attempt to salvage something from the game.

But the visitors proved unable to apply significant pressure in the closing stages, Bournemouth remaining resolute to record a victory that could prove crucial to their survival hopes.