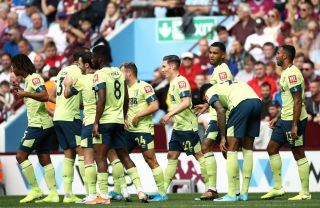 Aston Villa endured a disappointing first home game of their Premier League return as early goals from Josh King and Harry Wilson condemned them to a 2-1 loss to Bournemouth.

Villa’s fightback after that nightmare start saw them reduce the deficit in the 71st minute through a fine Luiz finish, but they were unable to save themselves from another defeat, a week after their top-flight comeback campaign opened with a 3-1 reverse at Tottenham.

Bournemouth, meanwhile, celebrated their first win of the season, having drawn 1-1 with Sheffield United last week.

There was considerable noise around Villa Park from home fans just ahead of the ground’s first Premier League match since May 2016 getting under way.

But that soon changed as the hosts were twice made to pay early on for misjudgements.

First Heaton, one of Villa’s raft of summer signings, brought down Callum Wilson in the box inside the opening minute. Referee Martin Atkinson pointed to the spot and King struck the penalty confidently into the corner.

We've given EVERYTHING for those three points! 💪 #AVLBOUpic.twitter.com/n2ZhHA3M2M— AFC Bournemouth (@afcbournemouth) August 17, 2019

Then, after Harry Wilson had fired over and John McGinn seen a strike well tipped over by Aaron Ramsdale at the other end, Luiz – the summer signing from Manchester City making his first Villa start – got things wrong as he let a pass run through his legs.

The loose ball was claimed by Harry Wilson and the winger, who is on loan from Liverpool, sent a shot in from outside the box via a deflection off ex-Cherries man Tyrone Mings and the post.

Luiz then looked fortunate not to divert a Callum Wilson cross into his own net, before Ramsdale made another good save to deny McGinn, and then turned a deflected Wesley effort behind.

McGinn crashed a great shot into the side-netting in the 42nd minute and after Heaton then denied Harry Wilson, Trezeguet saw his close-range attempt in first-half stoppage time kept out by a Nathan Ake block.

Philip Billing picked up the first booking of the contest in the 36th minute for a rash challenge on McGinn, and having seemed lucky to avoid being carded again following a number of subsequent incidents, he was substituted by Eddie Howe at the interval, with Andrew Surman coming on.

Villa fans cried out for a penalty shortly after the restart when Ramsdale collided with Wesley and the incident went to a VAR check but no penalty was given.

Dean Smith’s men continued to pressurise and after captain Jack Grealish hit a shot wide and headed over, Trezeguet’s shot on the turn was pushed away by Ramsdale.

Four minutes after that, Villa had a goal back as Luiz collected the ball from Grealish and curled a delightful shot into the net.

But Smith’s side could not find an equaliser, and it was Bournemouth who went closest to adding another goal as Ryan Fraser’s effort was kept out by Heaton.