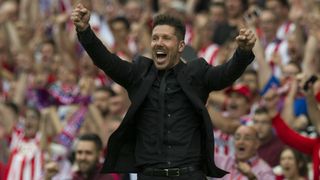 Diego Simeone has extended his contract as Atletico Madrid head coach until 2020.

The Atletico boss signed a two-year extension on Tuesday, extending his reign at a club where he took charge in December 2011.

A year ago, Simeone and Atleti agreed to shorten his contract expiry date from 2020 until 2018 amid speculation linking him with a move away.

But the 47-year-old's deal is now back at its original length, meaning he is tied to the club for the next three seasons.

He also led them to two Champions League finals, in 2014 and 2016, suffering defeats to city rivals Real Madrid on both occasions.

Atleti have finished in the top three of LaLiga for each of his five full seasons in charge.

Simeone's extension comes in the wake of Atletico's 5-1 LaLiga win away at Las Palmas, which was his 200th in all competitions since taking charge. The club, currently operating under a transfer ban, are set to start life at new stadium Wanda Metropolitano on September 16 when they host Malaga.