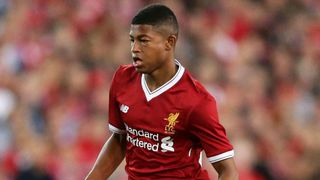 The 18-year-old striker put pen to paper at Liverpool's Melwood training base on Tuesday, with the deal widely reported to run for five years until 2023.

Brewster has progressed through Liverpool's academy ranks and came to prominence last year when starred in England's triumphant Under-17 World Cup campaign in India, finishing as top scorer at the tournament with eight goals.

An ankle injury sustained in January checked his progress but Bundesliga duo RB Leipzig and Borussia Monchengladbach were rumoured to be interested in Brewster before he committed himself to Liverpool.

"It feels great. I've wanted to do this for a very long time now and I think it's the right moment for me and my family," he told Liverpool's official website.

"I'm looking forward to getting back fit and making some appearances.

“Since I got here the club has been amazing to me and treated me like family. It seems like I've been here my whole life, to be honest.

"It's coming up to my fifth season now. I [still] remember my first training session. It's amazing and I can't wait to get started."

Brewster is yet to make his senior debut but will be part of Jurgen Klopp's first-team squad this season.