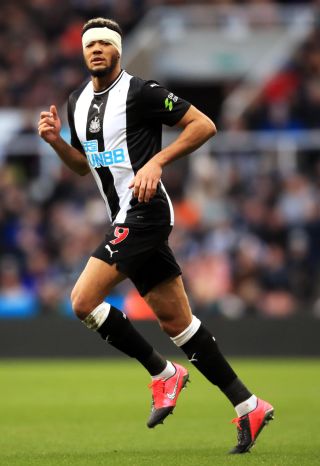 Steve Bruce has defended an attempt to invest around £35million in another midfielder rather than a striker in a bid to find a solution to Newcastle’s lack of goals.

As the January transfer window drew to a close, Bruce revealed the Magpies had missed out on their number one target – understood to be Lille’s Boubakary Soumare – after making an offer which came close to the club-record £40million they invested in Brazilian frontman Joelinton last summer.

Given that the former Hoffenheim striker Andy Carroll, Dwight Gayle and Yoshinori Muto have scored just a single Premier League goal between them this season, that left some onlookers scratching their heads.

However Bruce, who did attempt to land Chelsea’s Olivier Giroud on loan, said: “There wasn’t a striker to be had at that sort of money, and that’s the top and bottom of it.

“Who can we buy who can make a difference to us? There simply isn’t anyone who is better than what we’ve got, in my opinion.”

Asked why he had targeted another midfielder despite adding loan signings Nabil Bentaleb and Valentino Lazaro to his squad, Bruce added: “You can have as good a striker as you can up the pitch, but if you can’t create enough to them… that’s where I think we fall a bit short.

“I think we have to be better, a bit more creative as a team.”

Bruce, whose side face Norwich on Saturday, admitted he thought he had got his man last weekend and was ready to fly out to speak to the potential new boy in person when the plug was pulled.

He said: “We had a plane booked to go and meet him, but the boy changed his mind. We thought last weekend we had a chance to bring him in.

“He’s only young and there’s a lot of top clubs who have been linked with him. You’ve got to respect the decision.

“At the death, it was, ‘We want to keep our options open until the summer’. He changed his mind, otherwise I wouldn’t have gone on a goose chase. Certainly, I wouldn’t be getting on the plane.”