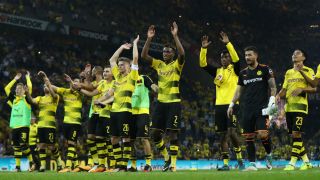 Roman Burki believes Borussia Dortmund's home crowd can be the key to beating Real Madrid in the Champions League on Tuesday.

Holders Madrid travel to Signal Iduna Park as early Group H leaders, although they finished second to Dortmund at the same stage of last season's competition.

Burki played in the home tie 12 months ago, when Dortmund scored a late equaliser in a 2-2 draw, and he believes the club's passionate supporters have a role to play once again.

"It's incredibly hard to beat us in front of our own crowd," Burki told Kicker. "In the Bundesliga, we are already 41 home games undefeated.

"For the first match [last season], I was very excited about playing against the best players in the world, but I did not sleep badly.

"My hope is that we can improve on last year's performance against Real, if we are better defensively. We have to be courageous and we will be rewarded."

Dortmund prepared for their big European clash with a 6-1 victory over Borussia Monchengladbach at the weekend.