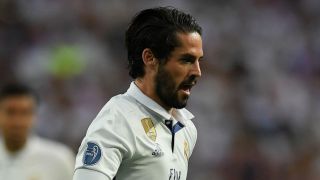 Isco has struggled to become a regular member of Madrid's starting line-up despite impressing when he has been called upon in LaLiga this term, as well as earning plaudits for his high-quality performances for Spain.

A lack of action in Madrid's biggest matches has led to suggestions Isco could seek pastures new with fierce rivals Barcelona reportedly interested in an audacious move – although the player himself denied he will make a switch to Camp Nou.

Isco is reportedly set to earn the nod in the Champions League semi-final first-leg against rivals Atletico Madrid on Tuesday, though, with Gareth Bale absent through injury.

Carvajal described Isco as "pure fantasy" when he has the ball at his feet, but recognises that a squad blessed with the likes of Cristiano Ronaldo, Bale, James Rodriguez and Lucas Vazquez means that Zidane has a tough job on his hands.

Speaking at a pre-match news conference, he said: "He's a very different player. With the ball at his feet he's pure fantasy.

"He brings us so many things with his game. We have 24 fantastic players, that's why they are at Real Madrid. The difficult part for the boss is deciding who plays."

Carvajal himself has enjoyed a stellar season for high-flyers Real, with Zidane labelling him and Marcelo as the best full-backs in the world after the dramatic 2-1 LaLiga win over Valencia on Saturday.

However, the Spain star says that is an opinion he does not necessarily share.

"I don't consider myself to be the best right-back in the world. Nor do I compare myself to anyone else," he said.

"I only try to do my job as best as I can and help the team. I'm in a good moment, physically and in terms of my game. Things have been turning out well for me."

In Atleti, Real face a side they have beaten in two of the past three Champions League finals and also boast a quarter-final triumph over in between.

But Carvajal, who was born and raised in Madrid, says previous encounters will have no bearing on the outcome of the tie.

"We are not thinking about what happened in previous years. Our objective is to win [the final] in Cardiff and win the league," he said.

"I've had the opportunity to play in 15 derbies and all of them are special. It's the big rivalry in our city.

"[Tuesday's] game, more than being a derby, is also the Champions League semi-final. I think that alone is sufficient motivation to go all out to beat our neighbours."