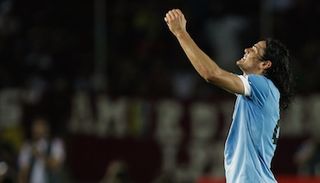 The Copa America holders, who had taken only two points from their previous six matches, climbed into the fifth-place play-off berth, trading places with Venezuela on goal difference.

The top four teams in the nine-nation group will go through to the finals in Brazil next year, and the fifth-placed side into a play-off against an Asian qualifier for another berth.

Uruguay, without suspended top scorer Luis Suarez, took the lead in the 28th minute from a quick break when Cavani cut inside defender Gabriel Cichero, leaving him sprawling on the ground, and hit a shot inside the far post.

Cavani was wasteful with a chance a minute later shooting wide while Diego Forlan shot over the bar in the 39th minute.

Venezuela had tested the Uruguay defence in the 18th minute with a free-kick by midfielder Juan Arango that goalkeeper Fernando Muslera failed to hold and the defence scrambled away for a corner.

The home side pressed for an equaliser throughout the second half but failed to really trouble Muslera and the massed ranks of Uruguay's defence in a match played in wet conditions at the Cachamay in Puerto Ordaz.

Venezuela had midfielder Tomas Rincon sent off six minutes from time for a second booking.