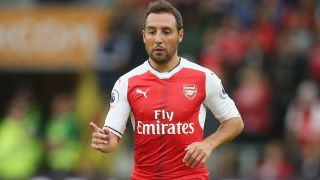 Santi Cazorla will be out of action for another five months after enduring a setback in his recovery, but the Arsenal midfielder confirmed he has agreed a new deal, having considered giving up his fight to regain fitness.

The 32-year-old has not featured for Arsenal since a 6-0 Champions League win over Ludogorets in October due to an ankle injury.

It was initially hoped the Spaniard would make a quick return, but he was forced to go under the knife a number of times and eventually missed the remainder of the 2016-17 campaign.

Cazorla underwent surgery for an eighth time this week and he has now revealed a return to action is still far away.

"I have not been given a timeframe for my comeback," Cazorla told Cadena Ser.

"It is very difficult to put a date on it, but I think it will be another five months.

"It has been since October that I last played. I have undergone eight surgeries, the last one Monday. I hope that things go better. I have had complications since November. I got a bacterial infection in surgery, my bone got infected, the wound would not close and I had a graft done.

"It was the worst season of my career. You feel like throwing in the towel, but my desire to play football is above everything."

The former Villarreal star made 11 appearances in all competitions in 2016-17, scoring twice in the process.

Cazorla confirmed his contract with Arsenal, which had been due to expire in June, has been renewed, with Arsene Wenger previously announcing the club would exercise an option to hold on to the midfielder.

"Arsenal were very good to me, they renewed me before my operation, the manager talked to me and gave me peace of mind," he added.