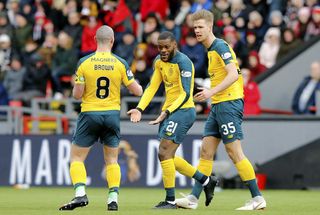 A much-changed Celtic side overcame the elements to secure a William Hill Scottish Cup quarter-final place with a 3-0 win over Clyde at Broadwood.

The Hoops famously lost in the tournament to the Bully Wee at the same venue in 2006 but, after French midfielder Olivier Ntcham opened the scoring in the 16th minute, there was little chance of lightning striking a second time, despite Storm Ciara making conditions extremely difficult.

Parkhead skipper Scott Brown stabbed in a second five minutes before the interval to further deflate the League One side, with substitute Vakoun Bayo adding a third in the last minute.

Ultimately, notwithstanding the foul weather, it was a comfortable afternoon for the Hoops, who have won the last 10 competitions in Scotland and are looking to win the Scottish Cup for an unprecedented fourth successive time.

Celtic boss Neil Lennon dipped into his squad by making six changes including a first start for Polish striker Patryk Klimala and the return of Scott Bain in goal, with Mohamed Elyounoussi Moritz Bauer, Boli Bolingoli and Ryan Christie returning.

Clyde had experience in the shape of skipper David Goodwillie and midfielder John Rankin and they enjoyed the early tussles in the unpredictable, swirling wind which was later to be accompanied by rain.

Clyde keeper David Mitchell made a save from Elyounoussi in the 15th minute – albeit there was little power in the effort from close range – but moments later he had no chance when Ntcham turned inside and, from just outside the box, drove the ball into the far corner.

The goal saw the Scottish champions tighten their grip on the game and just after the half-hour mark Mitchell saved a decent long-range drive from Christie, who came close with another shot minutes later.

The Clyde keeper then made a fine block from Klimala after he had been put clean through by winger James Forrest.

Celtic’s second goal came from Christie’s corner from the left which was knocked on by Klimala with veteran midfielder Brown finishing off from almost on the line.

The tie then appeared to be effectively over.

Christie, through whom a lot of Celtic’s play flowed, tested Mitchell again early in the second half as Celtic resumed control.

Goodwillie threatened on the few occasions that the home side broke up the park but generally Clyde had to defend diligently against Hoops pressure.

Christie flashed a free-kick from 30 yards over the bar and Goodwillie drove wide at the other end from the edge of the box.

in the 85th minute Bayo, on for Klimala, hit the side-netting when he was put through by Christie, who then clipped the bar with a curling shot before Bayo eventually got his goal, converting a cut-back by Bauer.