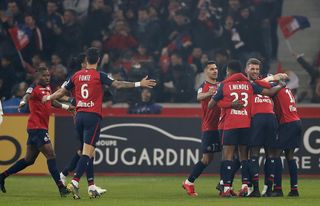 Paris St Germain must wait to secure the Ligue 1 title after a humbling 5-1 defeat to second-placed Lille on Sunday.

Second-half goals from Nicolas Pepe, Jonathan Bamba, Gabriel and Jose Fonte saw Lille inflict a painful defeat on PSG, who had Juan Bernat sent off in the 37th minute after losing Thiago Silva and Thomas Meunier to injury.

Kylian Mbappe had two goals disallowed for offside in the first half, which saw Lille lead through a Meunier own goal before Bernat replied.

PSG’s eighth Ligue 1 title remains a matter of time but they have now passed up chances to confirm it on consecutive Sundays after last week’s 2-2 draw with Strasbourg.

The Parisiens thought they had taken an early lead when Mbappe touched home Meunier’s cross, but the goal was correctly disallowed for offside, and moments later it was Lille who went ahead.

With their first real attack, Jonathan Ikone crossed from deep on the right and Meunier inadvertently turned it into his own net with Alphonse Areola wrong-footed.

PSG needed four minutes to respond as Mbappe controlled a bouncing ball and floated over a looping cross for Bernat to finish.

They thought they had turned it around entirely minutes later when Mbappe had the ball in the net, arrowing a finish past Mike Maignan after turning on the after-burners to get clear of the Lille defence.

The assistant’s flag had stayed down but the Video Assistant Referee intervened, correctly ruling Mbappe had been offside when he collected the ball just inside the Lille half.

PSG’s problems began to mount as they lost first Silva and then Meunier to injury, but the biggest blow to Thomas Tuchel’s game-plan came eight minutes before the break when Bernat was sent off for a tug on Pepe.

It looked soft – with the contact surely not enough to send the Lille man to the floor – but with Pepe through on goal the referee stuck by his decision after consultation with VAR.

Despite the setback, PSG had the next great chance but Maignan made a great save low to his left to keep out Julian Draxler’s close-range effort.

The first half ended with PSG surrounding the referee once again as Thiago Mendes was booked for what they felt was a swipe at Marco Verratti, who was quick to make the most of it.

While they argued, Lille captain Adam Soumaoro hobbled off to be replaced by Gabriel.

If that was a setback, you would not have known it from Lille’s second-half performance.

Five minutes after the break they struck on the counter-attack, with Pepe slipping the ball under Areola after Ikone’s ball split the PSG defence.

Further chances came as the game opened up. A lack of power cost Bamba a goal when he beat Areola only to see Thilo Kehrer gather the ball short of the line, so he made sure that was not an issue in the 65th minute when he rifled the ball past the keeper at his near post after breaking the offside trap.

PSG looked lost and were further punished in the 71st minute when Gabriel headed in Pepe’s free-kick for his first Ligue 1 goal.

Pepe was denied by Areola before Dani Alves made a crucial intervention as Loic Remy went for goal, but it would still get worse for the champions as ex-Southampton defender Fonte headed in Pepe’s corner for a fifth.