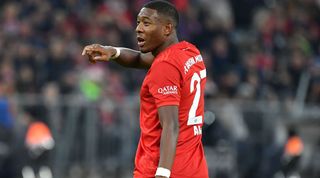 Chelsea are reportedly eyeing a move for Bayern Munich's David Alaba as they look to upgrade the left-back position.

Chelsea manager Frank Lampard is thought to be keen to shore up the left flank of his defence.

Marcos Alonso has been all but out of the picture so far, which is symptomatic of his decline since Antonio Conte's departure.

Brazilian-born Italian international Emerson Palmieri has also failed to make a lasting impression on Lampard, despite his run in the side early in the season.

Lampard has resorted to switching club captain Cesar Azpilicueta from right-back to left-back in order to cover the position.

English youngster Reece James has slotted into the right-back role with quiet confidence - showing real promise for the future.

Chelsea will be free to buy players again this month after their transfer ban was lifted.

The club are interested in a move for Bayern Munich's David Alaba, according to the Mirror.

Alaba won his eighth Bundesliga title with the Bavarian giants last season, although this season Bayern have struggled.

Bayern sit in third place just four points off the top, but for a club with such high expectations, being part of the chasing pack isn't what they're used to.

Chelsea are reportedly confident they can tempt Alaba into a move by offering him a new challenge in the Premier League.

The Austrian was the youngest ever player to be capped by his country at just 17 years old.

Now 27, Alaba still has some of his best years ahead of him and would lend experience to a young Chelsea squad.

Alaba is believed to be valued at around £60m which is the going rate for world-class full-backs nowadays.

Chelsea won't be short on funds as a result of making savings last summer during their ban.

Ranked! Every Premier League team of the 2010s, by total points