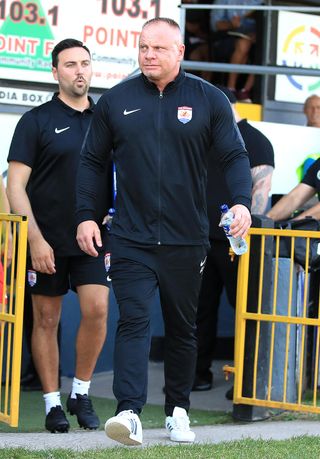 With the score goalless heading into first half added time, Serbia goalkeeper Vladimir Stojkovic appeared to take a swing at Nomads captain George Horan as they challenged for a cross.

Morrison felt it should have been a red card and a penalty but they received neither from Slovakian  official Michal Ocenas and went on to lose 1-0 to Aleksandar Scekic’s volley, leaving the Welsh Premier League side with a tough ask in Belgrade next week.

“I thought the referee had an incredibly poor night,” he said after the game at Rhyl’s Belle Vue ground.

“I thought it was too much for him. He was a young lad and he struggled with some of the decisions which were baffling – but I guess that is European football.

“I’ll never ask players to feign an injury if they are hit in the face – the referee has to see it and make the right decision and he didn’t. He bottled it.”

The hosts were happy to concede a huge amount of possession to their opponents but Morrison was satisfied with the way they restricted them to few chances.

It at least gives them a chance, however slim, next week.

“I thought they were absolutely immense. Let’s not kid ourselves that is a very good team,” he added.

“I was impressed with them across the board: big, physical, strong, but we stood up to it and gave a great account of ourselves.

“The key for me was not to go out there (to Belgrade) to fulfil a fixture and go out there as a tourist, to go as footballers, as a team, and give ourselves a chance to stay in this.”

Partizan manager Savo Milosevic refused to speak about the incident between Stojkovic and Horan but was not happy with what he felt was an over-physical approach by the home side, even though the Nomads had just three bookings and all in the first half.

“They should get three red cards because they were kicking our players without the ball,” he said.

“It is difficult when they put eight or nine players behind the ball, especially when the pitch is not too fast. I think we can do much better in Belgrade.”