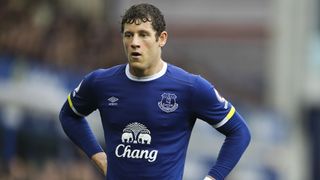 Chelsea boss Antonio Conte has challenged Ross Barkley to earn a place in the England squad for the World Cup following his move to Stamford Bridge.

The 24-year-old completed a transfer to the Premier League champions from Everton last Friday for a reported fee of £15million, despite having missed all of 2017-18 so far while he recovers from hamstring surgery.

Barkley last played for his country in a 2-1 friendly win over Australia in May 2016, but Conte hopes he can produce a level of form this season that will earn him a recall from Gareth Southgate.

"We are talking about a player with great talent," he said. "Before this bad injury he was with the national team.

"I think we have five months to show he deserves a call with the national team for the World Cup. I hope [he makes it], because it means he will do very well with us."

Conte believes Barkley can fill a number of positions in his Chelsea system, both as a midfielder or in a more advanced role, depending on the formation.

However, he does not expect the player to adjust immediately to his tactical demands.

"First of all, we have the necessity to bring him to the best physical condition," said Conte. "I think he can play in midfield, if we play with three midfielders, or as a number 10 if we play 3-4-3.

"Barkley is also a creative player. This signing is a good signing for the club. I think he has the quality to score more goals.