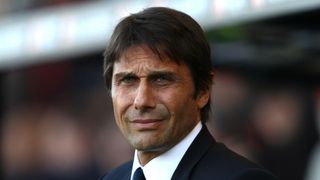 Antonio Conte insists he wants to remain at Chelsea for the foreseeable future despite renewed links with the head coach role at Inter.

The Italian is just one win away from steering the Blues to the Premier League title in his first season at Stamford Bridge and Chelsea will get the job done if they beat West Brom at The Hawthorns on Friday.

However, earlier this season former Juventus boss Conte was linked with a return to Italy to coach Inter and, with the Nerazzurri having dismissed Stefano Pioli this week, those rumours have quickly resurfaced.

Conte, though, was keen to distance himself from a departure when addressing the reports at a pre-match news conference.

"I have a contract with Chelsea, for two years," he said.

"It is logical when you start the work in a new club, the will is to continue to work for many years. For sure this is my will.

"Now the most important thing is to reach our target, because to arrive at this moment and have a great opportunity we have worked very hard.

"Now we need to be ready and do this step and to win and celebrate."

When pressed on the Inter rumours, he added: "I repeat what I said before, I have a contract, two years with Chelsea, but also I like to repeat for me and my players it is important to be focused in the moment, the moment is very important.

"It is not important the single person now, me the players, we must be focused on the moment.

"It is normal to have a lot of speculation, on me the players the coaches, but we can't lose the focus, now it is very important."

Conte re-emphasises he has a two-year contract with Chelsea but the most important is to focus on the present. May 11, 2017

It has also been rumoured that Chelsea – who are also in the FA Cup final where they will meet Arsenal – are planning to offer Conte a lucrative new contract with the promise of a huge war chest to add to his squad for next term.

But Conte says that money is not a motivating factor in any decisions he makes.

He added: "When you reach a type of level the money could be important, but it is not all.

"When you stay at this level the money only explains your value, it is not important.

"You work in football as a footballer, stay at the top level for many years, then become a top coach I don't think money is as important.

"It is important to win and to write the history of the club. Money is important, but not all."