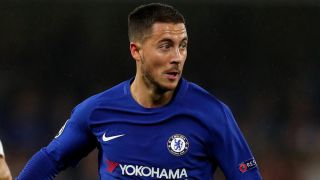 Chelsea head coach Antonio Conte is eager to remain patient with Eden Hazard after the star attacker continued his return from injury in the Champions League.

The Belgium international fractured his ankle in June but has stepped up his recovery, featuring for the national team and off the bench for Chelsea.

Hazard made his return for Conte's side against Leicester City, and played just over half an hour in their 6-0 thrashing of Qarabag on Tuesday.

As Chelsea prepare to host rivals Arsenal on Sunday, Conte said there was no need to take risks with the 26-year-old.

Asked if Hazard could start the derby clash, the Italian said: "It's too early to speak about this.

"We must have a bit of patience with him to give him the possibility to recover very well, to be totally fit. I think this is the right process for him.

"Don't forget in the team there are two players, Pedro and Willian, who are playing very well.

"We must be pleased to see him in the team. Now we must be calm and do the best for the player and the team, otherwise we risk a bad injury and delaying the situation."