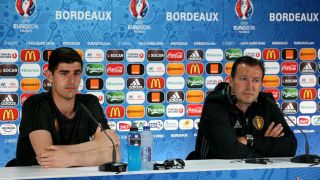 Thibaut Courtois and his father have opened "criminal indemnification proceedings for libel and defamation" against former Belgium coach Marc Wilmots for claiming they leaked team news.

Wilmots was speaking on Qatari television when he suggested he had been told the Chelsea goalkeeper's father, Thierry, had revealed Belgium's team selections to journalists at Euro 2016.

The former striker was dismissed after the tournament, as they were surprisingly eliminated by unfancied Wales in the quarter-finals, ensuring the talented Belgium squad were seen as having underperformed.

Wilmots, who left his role with Ivory Coast in November after failure to qualify for the World Cup, now faces a court battle, with Courtois and his father angered by the 49-year-old's claims.

Courtois wrote on Instagram: "Mr Wilmots - not for the first time - reiterates publicly and intentionally [makes] accusations against my honour and my reputation.

"As well as my father, we decided together to file a complaint accompanied by criminal indemnification proceedings for libel and defamation."