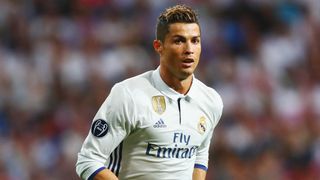 Cristiano Ronaldo has been left out of Real Madrid's squad to face Granada in a crucial LaLiga match on Saturday.

The in-form forward has often been rested ahead of key Champions League fixtures and Zinedine Zidane has again given him a break for the match at Los Carmenes, with the second leg of their semi-final against Atletico Madrid coming up on Wednesday.

Ronaldo is also one yellow card away from a suspension that would potentially rule him out of playing Sevilla at Santiago Bernabeu on May 14, which may have influenced Zidane's decision.

Madrid know that 10 points from their last four games will be enough to see them crowned champions for the first time since 2012 and will now face Tony Adams' relegated side without Ronaldo, who scored a hat-trick in the 3-0 first-leg win over Atletico and five goals in the previous round against Bayern Munich.

Madrid were already without forward Gareth Bale and defender Dani Carvajal due to injury.

In addition, Raphael Varane is not risked against Granada after missing training on Friday with what Zidane described as a "niggle" and while fellow centre-back Pepe is back in training, he will not return until next week.

Along with Ronaldo, Zidane has left out first-choice goalkeeper Keylor Navas.

"I speak to Cristiano a lot," Zidane said of Ronaldo at his pre-match media conference earlier on Friday.

"He knows and he understands well that until now he has always played 50, 60, or 70 games a season. The accumulation of all the years, he knows as well, sometimes you have to stop and rest.

"I have said before that I don't want to be the coach that makes Cristiano sit out. I speak to him and all the players a lot and I know that at times players have to rest.

"With all the games that we have to play in, if we want to be in good form and be at a great physical level then we have to rest players - that's it. It is a dialogue that we have. We have conversations about it."