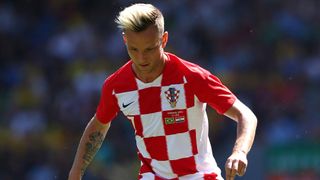 Forget Argentina, Nigeria are Croatia's toughest opponent in their bid to progress to the round of 16 at the World Cup, according to Andrej Kramaric.

Croatia – who finished third in 1998 – will face Nigeria in their Group D opener in Kaliningrad on Saturday.

Spearheaded by captain and five-time Ballon d'Or winner Lionel Messi, Argentina and Croatia are expected to vie for the top two spots.

However, Kramaric views Nigeria – one of the most talked about teams in the build-up, not necessarily for their football, but their stand-out kit – as Croatia's biggest danger at the showpiece tournament.

"I think it is Nigeria. Why? Against Nigeria we play the first and, for us, the most important game," Kramaric told FIFA.com. "That game will open or close the door of the World Cup for us!

"Therefore we need to apply our full concentration. Argentina? We don't need to talk about Argentina, we all know the great footballers they have. They are one of the favourites for the tournament."

vice-captain two days before the encounter in Kaliningrad. June 14, 2018

Boasting some of the most gifted players on the planet, Croatia are full of confidence ahead of their opener.

With Real Madrid's Champions League winner Luka Modric, Barcelona star Ivan Rakitic, and Inter duo Ivan Perisic and Marcelo Brozovic at Zlatko Dalic's disposal, expectations are high having failed to advance beyond the group stage of the World Cup since France 20 years ago.

Kramaric and Rakitic have both signalled Croatia's ambitions in Russia, where the Balkan nation once again loom as a dark horse.

"This is a great generation. Our motivation is at a high level," Kramaric said. "We want to get to the knockout stage, and with some luck we can achieve a great result."

Rakitic added: "The greatest ever pride is to play for the Croatian national team. We will all do our best to the last seconds of this competition. We expect great results in Russia."

The Group D clash will mark the first senior international meeting between Croatia and Nigeria.

Nigeria, who will be relying on Alex Iwobi, Ahmed Musa and Kelechi Iheanacho to provide the flare and creativity in the front third as Victor Moses offers width while John Obi Mikel and Wilfred Ndidi compliment the attacking set-up, are not short on confidence against the 20th-ranked Croatians.

And the Nigerians are hoping their symbol – the Eagle which is also one of the symbols of the team's host city in Essentuki – brings them luck against Croatia.

"So many signs – the team have a real relationship with Russia," head coach Gernot Rohr said. "Kaliningrad is a former German city and so I have a relationship with this country and I worked at Nice and Eintracht Frankfurt and both have an eagle as their symbol."

The heart and soul of Real Madrid and Croatia, all eyes will be on Luka Modric against Nigeria.

Coming off yet another Champions League crown, watch for Modric to dictate the pace and tempo against a Nigeria midfield including ex-Chelsea man Mikel and Ndidi.

In a team boasting the experience of Mikel and Victor Moses, it is easy to forget about Kelechi Iheanacho but the 21-year-old forward could prove the difference for Nigeria.

Having struggled to settle following his move to Leicester City, Iheanacho has a point to prove in Russia.

- This will be the first ever encounter between Croatia and Nigeria. Croatia's only previous World Cup game against African opposition saw them beat Cameroon 4-0 in June 2014.

- Croatia have won only one of their last seven World Cup games (D2 L4), it was against Cameroon in the 2014 edition (4-0). They have also kept only two clean sheets in their last 11 games.

- On the opening day of the tournament, Nigeria's squad will have an average age of 25 years and 336 days, the youngest of any team in the competition.