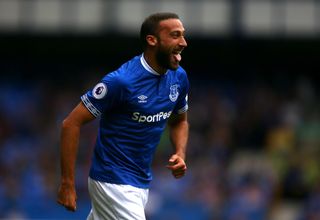 The 28-year-old Turkey international has joined Roy Hodgson’s side until the end of the season.

Tosun joined Everton from Besiktas in 2018 but has struggled to become a regular at Goodison Park.

Tosun made 51 first-team appearances at Everton, scoring 10 goals, but has featured just five times in the Premier League this season.

Only Watford have scored fewer Premier League goals this season than Palace, who have managed just 19 goals in 21 games despite sitting in the top half of the table.

Hodgson will hope Tosun’s arrival will ease the burden on Jordan Ayew and Wilfried Zaha, who have scored five and three times respectively this season.

Palace were linked with Tosun before he joined Everton and Hodgson could be ready to throw him straight in against Arsenal on Saturday.

“It’s nice now to get a second bite at the cherry with him, especially at a time when we are in desperate need of improving our strikeforce,” Palace boss Hodgson said at his Friday press conference.

“He is a goalscorer, but a hard-working goalscorer as well.

“He is in contention for the weekend and we are very grateful to Everton for allowing us to complete the move so quickly because we still have eight players missing.”

Palace chairman Steve Parish said on the club’s website: “We’re delighted to have secured Cenk’s services for the remainder of this season.

“We’ve enjoyed a great first half of the campaign and Cenk’s arrival will bolster our squad as we push for a top-half Premier League finish.

“Cenk has a proven record as a goalscorer and we’ve admired him for some time, so I’m very pleased to welcome him to Crystal Palace.”