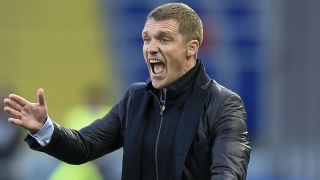 Jose Mourinho's current squad is the strongest Manchester United have had since the departure of Alex Ferguson, according to the manager who hopes to plot their downfall on Wednesday.

CSKA Moscow boss Viktor Goncharenko made the statement on the eve of his side's Champions League clash with the English giants, who have fond memories of the Russian capital after lifting the trophy there in 2008.

United will be without Michael Carrick, Marouane Fellaini and Paul Pogba for the battle between the top two in Group A, with both teams having won their opening fixtures.

However, Goncharenko believes his opposite number has enough quality on his roster to cope without the absent trio.

"After Alex Ferguson's legacy, this current version of Manchester United is without any doubt their strongest team," the Belarusian told the media.

"It's quite hard to argue that though, because Ferguson created so many strong versions of Manchester United. We can compare to 1999, 2003 or 2008…there were a lot of great squads."

"The characteristic of a great club is that if you lose some strong players you can substitute for these absences with other strong players," Goncharenko continued.

"Fellaini is one type [of player]. Matic and Herrera have different characteristics, but it doesn't mean that the level of performance will be at risk.

"If something changes with respect to set-pieces [without Fellaini], we won't find here any weaknesses of our opponent."

Yet despite talking up the visitors' strengths, Goncharenko - who hasn't ruled out right-back Mario Fernandes recovering from concussion in time to feature - has called on his players to exploit any deficiencies they can find in the three-time European champions.

"Our task is to find a weakness, a weak point in our opponent, and put pressure on them," he added.

"We know tomorrow we will be in a great atmosphere inside a wonderful stadium. We know that we don't need any additional motivation because they're so focused on the match."