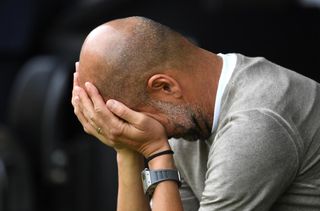 Pep Guardiola insists it is too early to consider Saturday’s shock defeat to Norwich as a blow to Manchester City’s title ambitions.

The reigning Premier League champions were deservedly beaten 3-2 at Carrow Road as the injury-hit Canaries took advantage of defensive frailties from the visitors to notch up a famous win.

Kenny McLean headed the hosts in front from a corner before Todd Cantwell doubled the lead – only for a Manchester City comeback to seemingly start as Sergio Aguero pulled a goal back on the stroke of half-time.

But Norwich did not buckle and Teemu Pukki’s sixth of the season soon after the restart – gifted to him after Nicolas Otamendi dallied in possession before being robbed of the ball on the edge of his own box – restored their two-goal advantage.

Rodri arrowed in a late consolation but the defeat leaves Guardiola’s side five points behind title rivals Liverpool – who are yet to drop any points.

Despite the setback, Guardiola believes it would be premature to consider it pivotal in the chase for a third consecutive league title.

“Five points (behind Liverpool) is five points – but we are in September,” he said.

A day without.. tough result to take but credit to Norwich tho. Gotta do more & better @mancity 💪🏾 pic.twitter.com/RtClSeNAZp— Raheem Sterling (@sterling7) September 14, 2019

“What are we supposed to do? Say ‘it’s September and congratulations to Liverpool, you champions?’

“Not for one second am I going to doubt my players.”

Guardiola also refused to criticise his players despite the defensive errors.

“Nico (Otamendi) doesn’t know someone is coming and nobody tells him,” he said.

“Sometimes you know we make mistakes. I think sometimes we forget these guys are human.

“Football is quick, things can go wrong and I must see what I can do to help them.”

For Norwich, this was a second victory since their return to the top-flight.

It will eclipse their win over Newcastle given the standard of opposition and the fact manager Daniel Farke was forced into naming two goalkeepers on the bench due to the length of his injury list.

“It is definitely a proud night without a doubt,” he said.

“To win against the best team in the world as Norwich City who are promoted and have no chance to spend money and an incredible amount of injuries, it was a win for our key people.”

💬 Daniel Farke reacts: The dressing room is buzzing, Carrow Road is buzzing. To win against one of the best teams in the world with our injury problems is special. #ncfcpic.twitter.com/XJzLbuxrbh— Norwich City FC (@NorwichCityFC) September 14, 2019

Farke also called on Norwich supporters to enjoy the win – although his own celebrations would be limited.

“It is a night to remember without any doubt,” he added.

“I will be happy when I’m back on the sofa. I’m too old and too exhausted to celebrate and we have training in the morning.

“After that I will be on the sofa with coffee and maybe some cake. That is how I celebrate.”