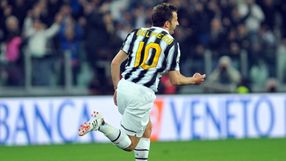 AC Milan had beaten Chievo 1-0 on Tuesday to throw down the gauntlet to their rivals but Juve went a point clear after a hard-fought game where Lazio's Stefano Mauri had equalised Simone Pepe's opener.

"We are in the final stages of the battle, we won't give up and neither will they," Del Piero told Sky.

"I feel fine in the head and in my legs and I'm just thinking about the next game."

Six games remain in one of the closest title run-ins in Italy for many years while the defeat for third-placed Lazio opened up the battle for the Champions League qualifying berth.

AS Roma beat fourth-placed Udinese 3-1 to go four points behind Lazio while Napoli lost 3-1 at home to Atalanta and Inter Milan beat Siena 2-1 thanks to Diego Milito's San Siro double.

Inter are now level with Napoli in a potential final Europa League spot as new coach Andrea Stramaccioni won for the second time in his three games in charge and Napoli failed to win for the fifth straight time in the league.

Juventus dominated at their eponymous stadium and were unlucky to go in level at the break having carved out several chances, Pepe scoring on the turn from Andrea Pirlo's pass on 30 minutes having missed an easier opportunity moments earlier.

Mauri scored with a header on the stroke of half-time to give champions Milan hope they would stay top going into the weekend but 37-year-old Del Piero, mainly a substitute these days and with his future up in the air, netted eight minutes from time.

Lazio goalkeeper Federico Marchetti could perhaps have done better to save the trademark free-kick but Juve fans did not care as their evergreen hero dug them out of a hole yet again.

In other results, bottom side Cesena are almost down after a 1-1 draw at Genoa, second-bottom Novara also look doomed following a 2-0 loss at Parma.

Lecce, who occupy the other relegation place, boosted their hopes of survival and cut the gap to Genoa to two points with a 2-1 victory at fading Catania.