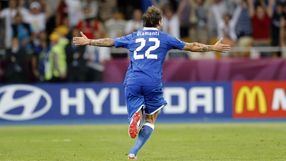 The former West Ham United player, who spent one season in England in 2009/10 before asking to go back to Italy, also hit the post during a sparkling substitute appearance in the 0-0 draw with England in Kiev which preceded the shootout.

However, Italy coach Cesare Prandelli indicated he was a long way from starting Thursday's semi-final with Germany given the importance of Antonio Cassano's inventiveness and Riccardo Montolivo's work ethic to help the more creative Andrea Pirlo.

"When you think of Diamanti, you have to think of replacing [Antonio] Cassano and Montolivo. All the balls that Pirlo touched were in part thanks to Montolivo," Prandelli told reporters on Monday.

The coach has said in the past that Diamanti, who joined Brescia from West Ham but now plays for Serie A side Bologna, could play as a second striker but he seems averse to changing the forward line too much for the Warsaw clash.

Mario Balotelli put in an impressive display of hard work against England although his shooting was wayward.

"I liked his display a lot because he did what I asked him to do. Obviously, with four or five chances he lacked luck and conviction. But his performance was very, very sufficient," Prandelli said.