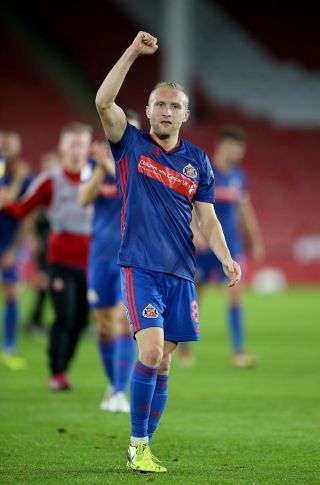 Dylan McGeouch has been granted permission to hold talks with Aberdeen over a move from Sunderland.

And the PA news agency understands the former Celtic and Hibernian midfielder should finalise a return to Scotland later on Tuesday after both clubs agreed terms.

The 26-year-old followed Jack Ross to Wearside in the summer of 2018 but has fallen out of favour under new Black Cats boss Phil Parkinson.

It was reported Ross – now in charge at Hibs – was interested in offering him a return to the capital but Dons boss Derek McInnes has won the race for his signature and will now hope to fly the Scotland international out to meet up with the rest of his squad at their winter training base in Dubai.

McGeouch has made only 12 appearances for Sunderland this term and has not been involved for the Sky Bet League One outfit at all since November.

But McInnes is a long-time admirer and will hope to inspire McGeouch to rediscover the kind of form he showed at Easter Road.

He was instrumental in helping Alan Stubbs’ Hibs team lift the Scottish Cup in 2016 and played just as crucial a role under Neil Lennon in the two following seasons as the Leith outfit won promotion back to the Ladbrokes Premiership before clinching a fourth-place finish in their first campaign back in the top flight.

McGeouch will also hope his return north of the border will come in time for him to force his way back into Scotland manager Steve Clarke’s plans for March’s Nations League play-offs.

His only two previous appearances for the national team came under Clarke’s predecessor Alex McLeish 18 months ago during the tour of Mexico and Peru.