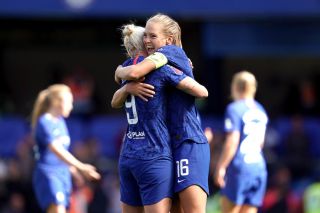 England’s early long-distance shot was enough for the Blues to secure a 1-0 win in a match they dominated for long periods in their first game of the season.

Spurs goalkeeper Becky Spencer kept her side in the game in the first half, making two good saves to deny Hannah Blundell and Guro Reiten.

The attendance figures did not break the 31,213 at the Etihad Stadium for the Manchester derby on Saturday, but dwarfed the previous season’s record of 5,265 at Brighton last season.

Tottenham survived an early scare when the ball fell to Chelsea captain Magdalena Eriksson at the far post inside the opening two minutes of the match, but her attempt went just wide.

The home side did not have to wait long for the goal however, with England’s effort from outside the box the perfect opening.

Chelsea continued to look the more dominant, as Spencer was called into action a number of times in the first half and made some good saves, notably a deflected effort from Blundell and a powerful strike from Reiten.

Tottenham started to come back into the contest and came close to scoring the equaliser with their best chance of the match just four minutes after the restart when debutant Rachel Furness hit a low shot but Ann-Katrin Berger managed to dive low and make the save.

Chelsea hit the woodwork twice in the 58th minute, as Drew Spence hit a powerful strike onto the crossbar, before Reiten’s follow-up header hit the post.

As the Blues looked for a second goal to seal all three points, Reiten sent in a curling free-kick which forced Spencer into another good save to deny the Norwegian midfielder.

In added time, England almost added a second after driving into the box and sending a powerful effort towards the goal, but Spencer was again able to make the save and deny the Blues forward.