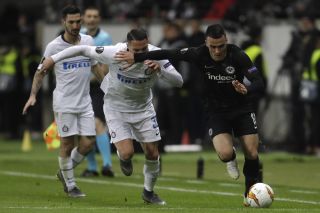 Goncalo Paciencia starred on his first start of the season as Eintracht Frankfurt cruised to a 3-0 win at Fortuna Dusseldorf in the Bundesliga.

The visitors were well on top in the opening 45 minutes but could not breach the Dusseldorf defence as they went into the half-time break goalless.

However, Paciencia broke the deadlock just three minutes into the second half when he headed home Jonathan De Guzman’s fine cross.

The Portuguese striker then turned provider in the first minute of stoppage time when he set up substitute Sebastien Haller to fire in a fine left-footed effort to seal maximum points.

Haller then added his second and Frankfurt’s third two minutes later after he slotted home Filip Kostic’s through ball to add gloss to the scoreline.

The victory sent Frankfurt back up to fifth place in the table, within three points of third-placed RB Leipzig and Borussia Monchengladbach.