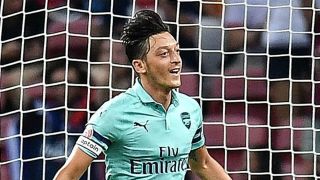 Arsenal head coach Unai Emery suggested Mesut Ozil could be among a number of different players he uses as captain.

With Per Mertesacker moving into a coaching position at the club, Arsenal are yet to name the defender's successor as skipper.

During his time at Sevilla, Emery used various players in the role and the Spaniard previously said he wants "five captains" at Arsenal.

Ozil wore the armband in Saturday's 5-1 defeat of Emery's former club Paris Saint-Germain on the playmaker's return to action following the World Cup and his announcement he will no longer play for Germany.

The 29-year-old was on the scoresheet as Alexandre Lacazette struck twice with Rob Holding and Eddie Nketiah also on target in a comprehensive International Champions Cup victory.

With Laurent Koscielny out long-term with an Achilles injury and experienced goalkeeper Petr Cech likely to be back-up to new signing Bernd Leno, Ozil is one of the most senior players in the side.

But Emery appeared to indicate he could avoid naming a fixed captain for the 2018-19 campaign as he is still considering a number of candidates for the role.

"We are working together and giving the responsibility to the player," Emery said of Ozil.

"I think he can take the responsibility like a captain, but not forget Koscielny because he is a captain as well.

"It's not closed yet. We will be finished. I will tell you once it's done. We have Koscielny who is injured and five more captains.

"Petr Cech, Aaron Ramsey, Mesut - and I will continue to search for another one or two."

Feeling proud to be captain today. Good win and another fantastic support here in Singapore July 28, 2018

Ozil stepped down from international duty after an extraordinary attack on the German FA, whom he accused of discrimination after he was criticised for meeting controversial Turkey president Recep Tayyip Erdogan prior to the World Cup.

The midfielder appeared happy to be back in action on the pitch for Arsenal and Emery suggested he could build the team's attack around Ozil.

"We want to give him the best position where he feels good on the pitch," Emery said.

"We started today with Mohamed [Elneny] and Matteo [Guendouzi] and then they tried to find through the lines players like Mesut and [Henrikh] Mkhitaryan.

"It depends, because Mesut can play on the right. We want to find with their quality, with their good positioning. I think in the first half we played good."