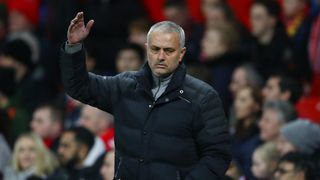 An emotional Jose Mourinho demanded the media "tell the truth" over what he perceives to be preferential treatment afforded to rival managers from officials.

The Manchester United manager showed his frustration by walking out of a television interview following the Red Devils' frustrating goalless draw against Hull City at Old Trafford on Wednesday.

Mourinho was equally riled when conducting his post-match news conference and launched an outburst when asked if Hull's Oumar Niasse should have been sent off by referee Mike Jones following an apparent stamp on Michael Carrick and later a foul on Daley Blind.

The Portuguese claimed it is the job of journalists to give their opinions on such incidents.

"Maybe your industry is going in another direction, I do not know, but for me journalism is to say the truth. Tell the truth, you simply have to tell the truth.

In his television interviews, Mourinho hinted that officials are hypocritical with how they treat him compared to other managers and made a clear reference to Liverpool boss Jurgen Klopp's exchange with fourth official Neil Swarbrick in their 1-1 draw at Chelsea on Tuesday.

And Mourinho made similar claims at the news conference, adding: "Yesterday [Tuesday], one manager was told by the fourth official, 'I love your emotion and, because I love your emotion, no problem.' I was told to sit down or I have to sit in the stands."