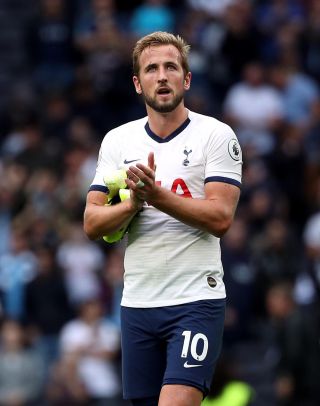 Harry Kane has revealed he will not simply stay at Tottenham “for the sake of it”.

The England captain admitted he would consider his Spurs future if the north London club stopped “progressing”.

The 26-year-old still wants to win trophies at Tottenham, but the Lilywhites have slipped to eighth in the suspended Premier League and remain without silverware since lifting the 2008 League Cup.

Kane’s current Spurs deal runs until 2024, and he has previously suggested he could stay with his boyhood club for his entire career.

“Obviously I get asked this question a lot,” said Kane, in an Instagram Live chat with Jamie Redknapp.

“I love Spurs, I’ll always love Spurs but I’ve always said if I don’t feel we’re progressing as a team or going in the right direction, I’m not someone to stay there for the sake of it.

“I’m an ambitious player, I want to improve, get better and become one of the top, top players.

“It all depends on what happens as a team and how we progress as a team.

“So it’s not a definite I’m going to stay there forever, but it’s not a no either.”

Tottenham reached the final of last term’s Champions League only to slip to defeat at the hands of Liverpool.

Well-regarded boss Mauricio Pochettino was sacked in November, to be replaced by Jose Mourinho.

And despite Spurs continuing to stutter since that switch, Kane revealed his respect for the “honest” Portuguese boss.

“We have got a fantastic team, but for one reason or another we haven’t been able to get those trophies, that you look from the outside and think we’ve got the team to get,” said Kane.

“It’s a hard thing to take as a player. I want to win everything we do.

“So when we get close it’s hard to take and it starts to build up. But from my point of view all you can do is do the best you can, give your best to win every game and win trophies.

“For one reason or another we haven’t quite got there yet. If we do finish the season we’ve got to try to get back into the Champions League spots.

“And next year would be the first chance for the gaffer to have a pre-season, and bed his values into the team. So we’ll see what happens.

“Of course I want to win trophies, and to do that sooner rather than later.”

Asked about working with Mourinho, Kane continued: “It’s been good. What you see is what you get. He’s an honest guy.

“From my point of view I’ve built a good relationship with him.

“It’s great to work under a manager like Jose. Growing up watching Premier Leagues he was a big part of that.

“So it’s another opportunity for me to work with one of the best managers in the world. So I’m excited to see how that relationship unfolds, and I know he’s excited to put his stamp on the team.

“From a players’ point of view we know we’ve got a top, top manager, so it’s up to us to go out and perform.”

Kane has not played since rupturing a hamstring tendon on January 1, but confirmed he should be ready for action as and when the Premier League returns.

England’s top-flight is currently suspended until April 30 due to the coronavirus pandemic.

He added: “Things are going great, I was doing my rehab well at Spurs up until last week, so I’ll just continue that at home.

“Whenever we go back I should be ready to integrate with the group. But I’ll just see how I feel; there’s no rush, no panic and I’m in a good place.”