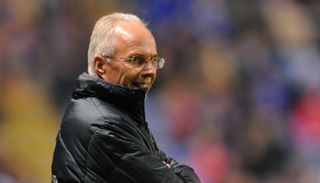 The Swede knows a great deal about Benfica having twice been in charge of the double European champions during his globetrotting career.

"Sure, Chelsea are the favourites with a very balanced squad and with very expensive players but in my opinion the technique of Benfica's players is a tad better," Eriksson told the aBola daily newspaper.

Cardozo, Lima and Rodrigo have bagged 71 of the club's 118 goals this season.

Eriksson, who was at the helm when the Portuguese team lost 1-0 to AC Milan in the 1990 European Cup final in Vienna, believes Benfica will quickly forget about their agonising 2-1 defeat by arch rivals Porto on Saturday.

Both sides went into the game undefeated and Porto's victory put them in pole position to win the domestic championship.

"A European final is unique," said Eriksson. "As soon as they start preparing for the final the Porto match will vanish from their minds."

Eriksson came close to landing a treble for Benfica in 1983 when they won the domestic league and cup double but lost 2-1 on aggregate to Anderlecht in the two-legged final of the UEFA Cup, the forerunner to the Europa League.

The Swede won the Portuguese league three times in all in his two spells at the club.

"The team is beat up and sad but we can have our pay back against Chelsea. We must believe," said Perez.

In what has become an iconic image in Portugal, coach Jorge Jesus sank to his knees in dispair when Porto scored their stoppage-time winner.

"This was a very painful loss in the very last move of the match," said Jesus. "We feel deep sorrow but no one can take away the work we've done, nor our quality."

Benfica have good memories of Amsterdam where they won the last of their European Cups against Real Madrid in 1962.

Beating all-conquering Real, who had won the trophy five years in a row from 1956-60, was probably the greatest moment in the club's proud history.

Jesus, who was in charge when Benfica were beaten by domestic rivals Braga in the 2011 Europa League semi-finals, is looking forward to taking on last year's Champions League winners Chelsea.

"There won't be many finals like this either in my career or the career of my players," he said. "Motivation won't be a problem and winning the Europa League would bring us international recognition."