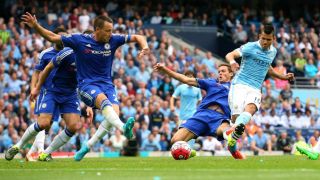 Chelsea will meet Manchester City in the fifth round of the FA Cup at Stamford Bridge.

Guus Hiddink's side thrashed MK Dons 5-1 on Sunday and will now host the 2011 winners, who beat Aston Villa 4-0 on Saturday.

Manchester United have been handed an away trip to League One side Shrewsbury Town, while Arsenal will meet Hull City in a repeat of the final of two seasons ago and a third-round contest from last year.

AFC Bournemouth host Everton and Tottenham take on Crystal Palace in two all-Premier League affairs, while the winner of the replay between Liverpool and West Ham will travel to face Blackburn Rovers.

The fifth-round fixtures are due to be held over the weekend of February 20 and 21.