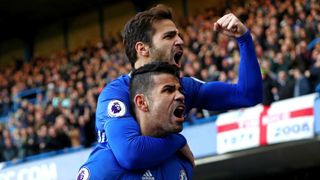 Cesc Fabregas claims there has not been a "pure striker" better than Diego Costa in recent times and is sorry to see him leave Chelsea for Atletico Madrid.

The Premier League champions last week agreed to sell the Brazil-born Spain international back to Atleti for a fee that could reportedly rise to €60million.

The 28-year-old fell out with Blues boss Antonio Conte last season over rumoured interest from the Chinese Super League, with Costa failing to report back for training ahead of the 2017-18 campaign after being told he was no longer in the Italian's plans.

Chelsea will instead rely on Alvaro Morata, a club-record signing from Real Madrid, for goals as they seek to retain the title.

But Fabregas has made no attempt to disguise his disappointment at losing a friend and valued colleague.

"Clearly, I would have preferred for him to continue as a team-mate," he told Marca. "Diego will never be a rival to me.

"In recent years there has not been a pure striker better than him; he understood my game, read my passes and most importantly he could score from them.

"With Diego, it is not just what he gives you on the pitch but it is his character, too. He brings a lot to the group."

Chelsea visit Atleti in the Champions League on Wednesday, although Costa will not be eligible to play for the club until a FIFA-imposed ban on registering new players ends in January.

"It's a shame for him more than anyone," Fabregas said of the centre-forward's period in self-imposed exile.

"Diego knew that if he signed for Atletico he could not play for a few months.

"It has been a difficult situation for both him and Chelsea; it has been wrong."