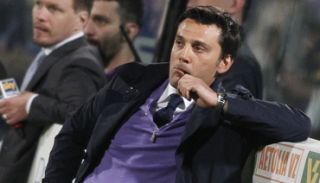 Milan, needing to beat relegated Siena to hold on to third spot, won 2-1 after equalising with a controversial penalty won and converted by Mario Balotelli before Philippe Mexes grabbed the winner.

The goals were both scored in the last six minutes and allowed Milan to finish two points ahead of fourth-placed Fiorentina, who thrashed Pescara 5-1.

"It was disappointing to see the dream disappear like that... we believed in the Champions League."

Defender Gonzalo Rodriguez commented on Twitter: "If I say everything I think, I won't play again in Italy."

Sporting director Daniele Prade said he was not surprised by the outcome.

"We feel impotent in the face of these situations," he said. "There aren't words at the moment. We deserved a lot more, we have never been gifted anything.

"We went from euphoria to misery but I can say we had expected it. The epilogue had already been written."

Coach Vincenzo Montella (pictured) tried to look on the bright side.

"We shouldn't feel bitter about this, we can finish the season with satisfaction and pride, all of us, players, staff, coaches and supporters," he said.

"We should be proud that we took Milan to the wire and that they had to clinch their place in the last minute.

"We are satisfied with our performance in the championship."